Celebrity Jersey Cards is a weekly series in which I create virtual trading cards for celebrities wearing sports jerseys. With football ending, I turn my attention to other sports.

Reggie Jackson started his baseball career with the Kansas City A's. He carved out a Hall of Fame career with the A's, New York Yankees and California Angels, hitting 563 homers and always being in the spotlight. Jackson was part of a special night for the San Jose Sharks, which is when he earned a Celebrity Jersey Card. Jackson wore his regular #44 on his Sharks jersey, which is the number most notably worn by Marc-Edouard-Vlasic, a Sharks defenseman for the last 16 seasons. 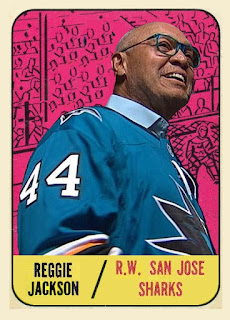 A great athlete, Ryan Zimmerman has starred for 16 seasons with the Washington Nationals. Mostly a third baseman, Zim has racked up 1,846 hits in his excellent career. Not content with stopping balls in the infield, Zim got a chance to stop shots on the ice for the Washington Capitals during a practice. Zimmerman's stint as a goalie earned him a Celebrity Jersey Card. Could Zim have followed in the skate prints of goalies like Olaf Kolzig, Mike Palmateer, Don Beaupre and Michel Belhumeur? I would not bet against him. 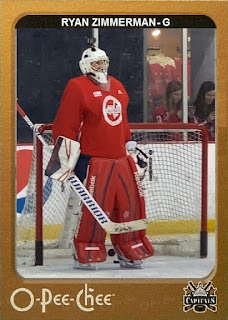