On the Beat With Kayla Gomez

Yesterday, I interviewed young boxer Kayla Gomez for Global Women's Sports Radio. The 18 year old from El Paso, Texas has a unique background and career path and she talked about all of it.

Kayla faced a serious challenge in the form of epileptic seizures until she was five. With medicine and treatments, she outgrew epilepsy. It was a hard time for her and her family, but it showed what a fighter she truly was.

Soon her fighting took place in the boxing ring. As they were in her battle with epilepsy, her grandmother and mother were once again in her corner. This time though, it was the literal corner, as they were Kayla's trainers.

Cindy and Crystal Aceves had more to offer than familial bonds. Both had successful boxing resumes of their own. Team Gomez was a real family effort and a winning combination.

The rest of her list is much lengthier and seemingly growing with every match. The next big addition to that list Kayla wants is the Olympics in 2024.

Kayla was kind enough to delay a run yesterday to discuss her career. She talked about the possible pressure of growing up in a boxing family, the unique system with two women as her coaches, social media, her boxing style, her training regimen and more.

I was impressed with her positivity and maturity. Her boxing resume speaks volumes of her in-ring ability, but this interview shows the qaulity person Kayla is. It's a winning combination which should take her to even greater success.

Our interview is at On the Beat With Kayla Gomez. I wish Kayla luck and will follow her career here and for GWSR. 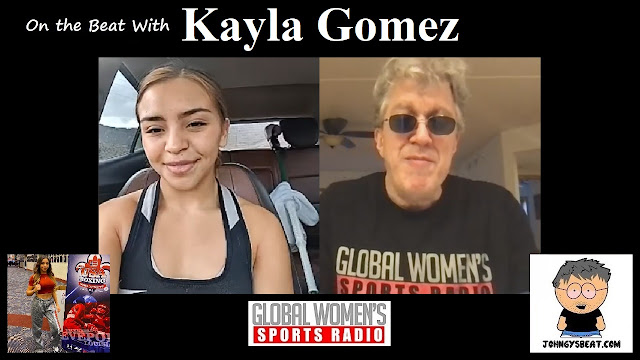