Booker T is a feelgood wrestling success story. In his early 20s, Booker spent time in jail for robbery. Once released, at the urging of his brother Stevie Ray, Booker embarked on a wrestling career. Booker and Stevie Ray became one of the most successful tag teams, before Booker went on to solo stardom. Booker won many titles as part of the Harlem Heat tag team and as a singles wrestler. Now retired, Booker is still active on WWE TV as a commentator and analyst.

The Squared Circle Expo last May featured dozens of wrestling legends, but perhaps Booker was the biggest name. I had met Booker a few times already, but I couldn't pass up meeting the legend again. Neither could my friend Tony.

I have featured Tony several times here. He's a great guy and one friend I really missed during the pandemic. We don't often see each other, but I can usually count on reconnecting with him at such events. Without these events, we were left to texting and messaging. The SCE was the first real return to normalcy.

Booket T and Tony would have made an interesting tag team. They wouldn't do anything cheesy like Harlem Heat 2020 (those type names are never a good sign). Maybe Chicago Cold? Their finisher could be the snow plow. I'll keep thinking.

For more info on SCE II scheduled for April 15-16, 2022, go to SquaredCircleX.com. It's too early to know if Booker will be there again, but there definitely will be a guest roster full of legends and Tony will probably be there, too. He's a legend all by himself! 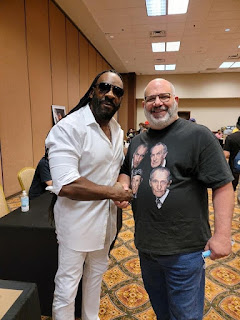