On the Beat With Loyola Women's Basketball

Loyola's Janae Gonzales, Bre Hampton-Bey, Allison Day and Riley Blackwell went out smiling today, as they celebrated their last home game by beating Misouri State 60-42. The game was never really in doubt, as the Ramblers cruised to their 18th win.

Missouri State was held to a paltry 23.9 percent (16-67) shooting from the field. For much of the game, they were below 20 percent.

Day led the way with 16 points and nine boards, just missing a double-double. Maya Chandler had 15 and Blackwell added 13. Sam Galanopoulos only had two points, but six rebounds and seven assists in a well-rounded effort.

In the post game presser, the departing Ramblers all expressed the bittersweet feeling of winning on Senior Day, yet playing their last home game. Coach Kate Achter stated the team would stick to basics for the most part in the MVC tourney, but she had a few new wrinkles she might bring out. That press session is at On the Beat With Loyola WBB.

Loyola earned an opening-round bye in the MVC Championship.  The fifth-seeded Ramblers face Illinois State, the tournament's No. 4 seed, in a quarterfinal-round game at 2:30 p.m. on Friday at TaxSlayer Center in Moline, Illinois.

For more info, go to LoyolaRamblers.com. Check back here and GlobalWomensSportsRadio.com for recurring coverage. 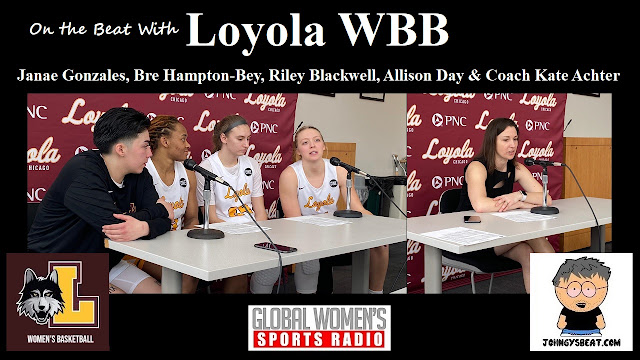