On the Beat With Zoe Meshenberg

Yesterday, I had the pleasure of interviewing first-time author Zoe Meshenberg. A grad student, Zoe is about to release "Rabbit Holes & Pepper Spray," her debut novel.

I have known Zoe for several years, having seen her at Chicago Bandits games, but I never knew she had a novel (or novel series) in the works. As she tells in the interview, it has been a work in progress for more than 15 years.

"Rabbit Holes & Pepper Spray" is a young adult fantasy aimed at the 13-18 year old (but certainly not limited to that group). She describes it as a quirky adventure in which everyone has superpowers based on their personalities, but four characters do not realize it until they are kidnapped and the story starts to unfold. I was hooked on the title, but hearing Zoe talk about the plot intrigued me more.

Zoe discussed her path to writing it, the process, potential sequels, her future and more. Her passion and exuberance was evident and infectious.

I love delving into the stages and process of production of creators. Zoe talked about the challenges and joys involved, including mixed reviews on the title she chose, a title I love, as I wrote earlier. Zoe gave a lot of insight into the whole experience. It was interesting and enlightening.

I also love supporting a creator from the start and following their progression. It's rare I get to talk to one before the first public display of their work. "Rabbit Holes & Pepper Spray" officially comes out earlier this week on Amazon. I'm sure Zoe is excited, but her family, friends (including Bandit Nation) and I all shared the feeling as we eagerly awaited the release. 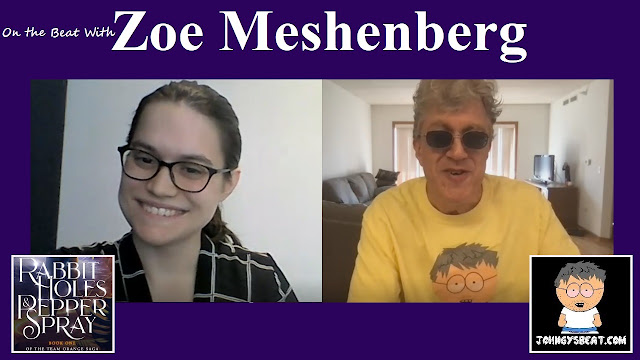