This is a big episode of Pinfalls. It now appears on Every Day Fan Sports, the Johngy Or Else podcast platform, YouTube and here.

The Usos vs. The Street Profits

The Mysterios vs. The Judgment Day

Logan Paul vs. The Miz

There is also a question if Theory will cash in his Money in the Bank Briefcase. That makes it an even 10 predictions. The only spoiler I will reveal is Tommy and I differed on only three of the ten predictions.

Debuting in 1988, SummerSlam is one of the original four WWE PPV's. It is still considered one of the big four PPV's.

With Vince retiring, this is the first PPV under the new regime. That could change original plans for SummerSlam and storylines going forward. Tommy and I took that into consideration.

One person not announced on the card who could play a big role is Charlotte Flair. Will the Queen interfere in either (or both) of the women's matches? Flair could be a difference maker.

Watch the Pinfalls video at Pinfalls: WWE SummerSlam 2022. Make your own predictions and see how you do against us. Check back on Every Day Fan Sports for the WWE SummerSlam recap, 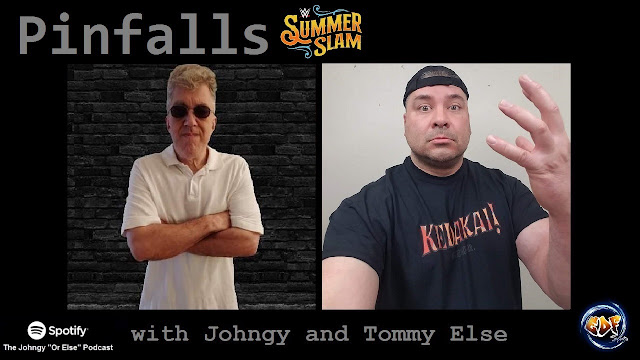