Athletes Unlimited wrapped up its third season in dramatic fashion. After leading most of the season, catcher Dejah Mulipola fell behind, but roared back to take the 2022 season crown.

Heading into the final game of the season, Mulipola trailed Alyssa Denham by 184 points. Mulipola needed a big game and delivered. A triple, two walks and a home run later, Mulipola earned the AU crown. She finished 62 points ahead of Denham who pitched a victory earlier in the day.

Rookie of the Year: Shannon Rhodes

In addition to the usual season end sadness, tears flowed as the league and fans gave final cheers to the retiring Amanda Chidester and Danielle O'Toole. The two former Chicago Bandits received standing ovatuons throughout the games.

It was an amazing third season for AU Softball. Its debut season was played in an empty stadium due to the pandemic. Last season, fans were back, but the ongoing pandemic affected everything. This season, the crowds were back strong and it was softball as usual.

As already announced, AU will return to Rosemont for the 2023 season. The folks in Rosemont and the local fans would like nothing more than to have AU here permanently.

This week, players will return to their homes after goodbye hugs to their teammates. Fans will fill their weekends in other ways. All will recall many fun times this season and look forward to next season. It's only about 46 weeks away. Go to AUProSports.com for updates on all AU sports. 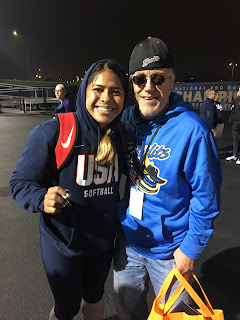