As I have previously written, SCX II surpassed the debut of SCX, which is amazing in itself. SCX's debut was the best first convention I have attended. SCX II was even better, definitely on e of the best cons ever.

One of the most popular wrestlers at SCX II was Adam Cole. Currently wrestling for All Elite Wrestling, Cole debuted in 2008. He had stints in Ring of Honor, WWE and elsewhere, but seems to have found a home in AEW. Cole also has been dating fellow wrestler Dr. Britt Baker, D.M.D. (Yes, she is legit a dentist.). Lucky guy!

Cole's line stretched out the entire time he was there. Despite the crowd, the line moved quickly, but Cole still made sure to make each encounter something a little special. He asked your name, shok you hand and thanked you for coming. It's personal touches like that you always remember.

That part doesn't surprise me. SCX's wrestling guests as a group are amazingly fan-friendly. In the two years of the event, I have had nothing but pleasant experiences with every wrestler. Not one was even bland.

My countdown to SCX III started while I was still at SCX II. It's still a while away, but it will be here quickly. I highly encourage everyone to lock in their tickets now. Get the VIP if possible, because it will save you lots of time in lines, allowing you to meet more wrestlers quicker.

Go to SquaredCircleX.com for more info. Check back here for my recurring coverage. 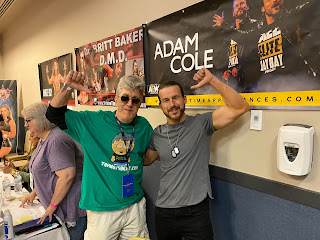