John has written (or co-written) many wrestling books, including biographies on Wahoo McDaniel, Chris Candido, Princess Victoria and other fascinating wrestlers. Not limited to the squared circle, John also has written a few fiction books, including the Dead Park series. I proudly have several of John's books on my bookshelf, with more to come.

It had been longer than usual since I last spoke to John, but we finally got together yesterday for a Zoom interview. As usual, we talked indy wrestling and his book projects. That interview is at On the Beat With John Cosper.

John started by discussing a night at FTC wrestling with Bobby Blaze. Likening his experience with Blaze to previous encounters with the late Tracy Smothers, John was fascinated hearing Blaze's insight. Several wrestlers earned John's praise, perhaps with Reese Ramone at the top of the list.

From there, John discussed his multiple visits to Ohio Valley Wrestling, run by WWE legend Al Snow. John had several interesting stories from the shows and mentioned some of the talent. OVW is doing great things and it all starts with Snow.

As always, John discussed a few wrestlers on the rise. We share a respect for Billie Starkz, current the champ at both 2econd Wrestling and Girl Fight Wrestling. Having seen Starkz twice recently, I am very impressed with every aspect of her.

While I have yet to see Charlie Kruel in person, I have followed her online and I have a growing admiration for her. Still young and early in her wrestling career, Kruel has already taken her character in several directions, while not losing her core nature. She is one of the most intriguing young wrestlers.

We finished by discussing John's books. Diary of a Mad Man, the Mad Man Pondo book co-written by John and Pondo was the first of John's books to catch my eye. Since then, I have added many of his other biographies and have expanded my knowledge because of him.

I was drawn into his fiction books by Charlie Kruel: Escape From VHS Hell. This “bio” of Charlie Kruel is a fascinating look at the Kruel character. Already hooked by his writing, His Dead Park series has been my next favorite. John discussed all of this, including revealing Dead Park will be revisited at least a few more times.

I have such a good time discussing wrestling with John. After the recording, John agreed to join e for regular updates to discuss indy wrestling and other wrestling-related topics. Look for those here and on TheEveryDayFan.com.

Go to EatSleepWrestle.com for more info on all of John's wrestling books. Also, check DeadParkBooks.com, his site for the Dead Park series and other works. 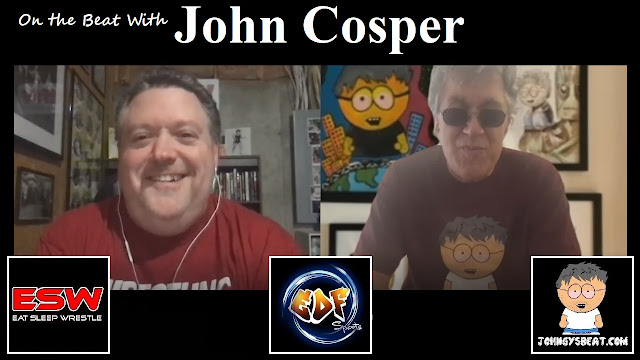