Cards That Never Were is a recurring series in which I create virtual trading cards for players missed in various sets. It is a concept I have borrowed from far too many to list, but I appreciate all of their efforts. More of my creations and a lot of others (and not just baseball cards) can be found in the Custom Baseball Cards Facebook group.

A while back I filled in some missing cards for former NFL safety Lyle Blackwood. I had three still missing, but have since been able to create those still missing cards, with a little help. Lynn from the aforementioned FB group created a 1977 card for Blackwood and I created an '81 and an '87. Combined with my previous cards, Blackwood now has all of his rightful cards.

On a related note, Blackwood's '87 card mate is his brother Glenn, who played alongside Lyle for several years with the Dolphins. I previously noted that Lyle and Glenn appeared on a "Brothers" card in 1982, but Lyle did not have a separate card, which annoyed me immensely as a collector back then. 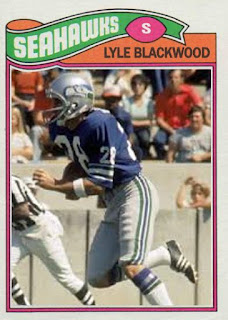 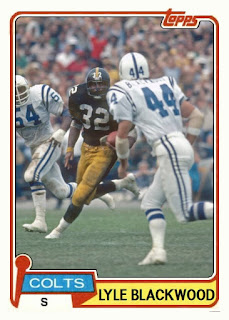 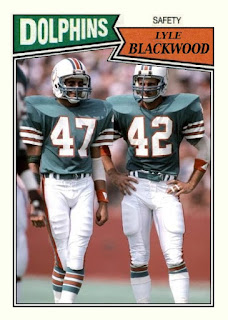