Today, I feature my pal Tony Feddeler and wrestler Adam Page at Squared Circle Expo 2022. With SCX 2023 just six months away, it is time to start planning that trip.

I have often written about being envious of some of the celebs Tony has met. While I am envious again of him meeting Page, this one was my fault. How did I miss meeting Page?

My excuse is the number of wrestling stars and legends at SCX II. With more than 65 wrestlers doing meet-and-greets, at times it was dizzying in a good way. I actually kept a list of who I met and needed to meet, yet somehow Page was missed. I can't be upset though, because I did meet so many interesting wrestlers.

Page debuted in 2008, wrestling on the indy scene, before joining Ring of Honor in 2011. He eventually made his way to All Elite Wrestling in 2019. At AEW, he has won the World Championship and the Tag Championship (with Kenny Omega). He also won several special matches and awards. He is a young veteran with a lot of potential.

Tony is a slightly older veteran, with his own list of accomplishments. Worth noting (at least to me) is his support of Johngy's Beat, including sporting the tshirt many times. Don't tell him, but I'd still value his friendship even if he didn't wear the shirt.

This was our first real trip together and it was a blast. Hopefully, it is the first of more to come.

SCX III runs April 7-8 in Indianapolis. It really is one of the best and smoothest-run conventions I have ever attended. Its debut in 2021 was amazing, yet somehow SCX 2022 topped it. SCX III promises to be the best one yet.

Go to SquaredCircleX.com for more info on SCX 2023. Also, check here for my recurring coverage. 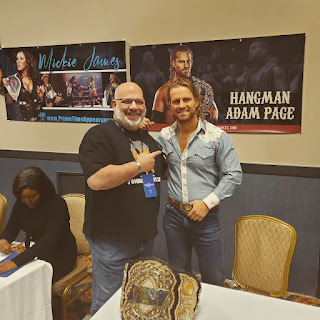