On the Beat With Missa Kate

On The Johngy "OR ELSE" Podcast, Tommy Else and I interviewed wrestler Miss Kate. You can find that at Ep. 39: "Missa Kate" and all of our episodes on Spotify.

I was excited about this interview because of two main reasons. First, while we have both floated around the Chicago wrestling scene, I never had a real chance to talk to her. In fact, I only saw her wrestle once and that was at the recent Women's Wrestling Army event.

Additionally, the interview took on more significance as she was just announced as part of a three way match (along with Shazza McKenzie) and Billie Starkz at 2econd Wrestling's event on October 27. A main event featuring three women for the company's main title is quite an accomplishment. Starkz is a credible champion, but Missa Kate and Shazza are worthy challengers. This should be a great match.

In our interview, Missa Kate talked about all of that and more, and explained the origin of her wrestling name. I was quite impressed with her thought process in and out of wrestling. She is an interesting young woman who gave us a fascinating interview.

On behalf of Tommy, I thank her for her time and consideration. Look for her on social media and in wrestling rings all over. 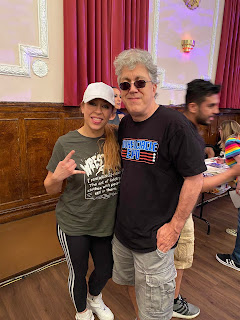 Email ThisBlogThis!Share to TwitterShare to FacebookShare to Pinterest
Labels: 2022, Every Day Fan Sports, Interviews, John Wroblewski, Johngy, Missa Kate, The Johngy or Else Podcast, Tommy Else