The Squared Circle Expo in Indianapolis, IN was the first major event I attended after the pandemic shut down most everything in early 2020. The SCE 2021 was their debut event and it was fantastic, but SCX II was even better. SCX III returns April 7-8 and it promised to be even better than the others.

It featured a large lineup of wrestling legends and current stars. One of the active wrestlers was Darby Allin of All Elite Wrestling.

Debuting in 2015, Allin has wrestled for Game Changer Wrestling, World Wrestling Network, Lucha Libre and Progress Wrestling, before signing with AEW in 2019. He held the AEW TNT Championship once and was ranked No. 55 of the top 500 singles wrestlers in the PWI 500 in 2020.

John Dean is my friend from conventions and wrestling. He has met many wrestlers and was all over the place at the SCE 2021. Still, he found time to catch up with me. It's always good seeing John.

Getting a current star like Allin was a big deal for SCE, but it didn't end there. SCE also had AEW's Tay Conti and Britt Baker, among many others. It was an amazing debut event and SCE 2022, scheduled for 4/15-16,/2021, will be even better.

Go to SquaredCircleX.com for all the info on SCE 2022. Also, check AllEliteWrestling.com. 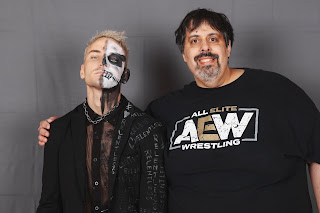