On the Beat With Chuck Swirsky

Chuck Swirsky is one of the true pioneers of sports talk radio. Before there were sports talk stations, Swirsky was THE source for Chicago sports talk.

In his four decades on the air, Swirsky has experienced thousands of awesome moments. Now, thanks to "Always A Pleasure," his newly-released autobiography, Swirsky shres many of those tales with readers. I had the pleasure of interviewing Swirsky about his career and the book at On the Beat With Chuck Swirsky.

Back in 1979, Chuck hosted a nightly sports talk radio show in Chicago. Each night, my friend Tom and I would listen to Swirsky's show, then discuss it the next day. Swirsky was positive and upbeat, but never sugar-coated things. It was real sports talk. His goal was purely to entertain fans with sports talk and entertain us he did. Through the mid-90s, on a couple different stations, in different roles, Swirsky delivered sports news and talked sports like no other.

After leaving Chicago, he eventually went to Toronto to become the play-by-play voice of the Toronto Raptors. He also hosted a radio show among other roles.

Fortunately for Chicagoans, he returned to the Windy City in 2008 to do radio for the Chicago Bulls. It's no exaggeration when I say just hearing his voice emanating from the radio was like having a long-lost friend return.

I have just given a very brief summary of Swirsky's career. Of course, his forty plus years in broadcasting encompass more than a resume would reveal. Swirsky has thousands of stories.

Now he has a book to share many of those stories. "Always My Pleasure" is more than just his career recap though. It is an inside look at the man behind the mic. This morning I had the pleasure of interviewing Swirsky to talk about his life and book.

Swirsky discussed a few bits about his career, including his parents, his faith, underrated career highlights, his bobbleheads and more, all of which is in "Always A Pleasure." Of course, for strict sports junkies, there is plenty of sports talk.

I asked him his selection process in selecting among his thousands of stories. He made a funny Beatles White Album reference, before beating me to the punch by answering my next question before I asked it. Yes, there will be a second book.

His genuine positive outlook hasn't changed in the many years since I first heard him on my transister radio. Swirsky delivers the game, sports talk and this interview, right from his heart. He truly is a Chicago treasure.

Go to ChuckSwirskyTheBook.com for more info on his book. Check here and TheEveryDayFan.com for more sports coverage. 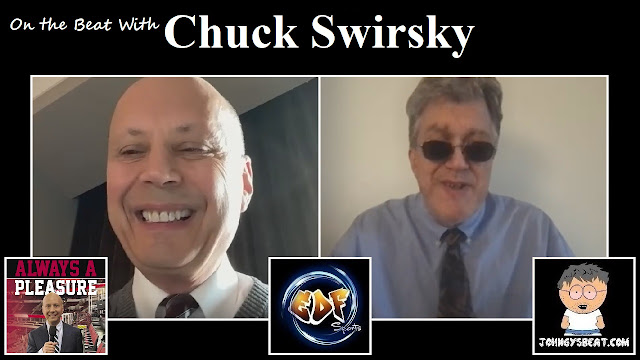