Celebrity Jersey Cards is a weekly series in which I create virtual trading cards for celebrities wearing jerseys. Today, I have musical Raiders.

Born in Mexico, Carlos Santana grew up to be a Hall of Fame musician. An amazing guitarist, In 2015, Rolling Stone ranked him at No. 20 on their list of the top 100 guitarists. He has won 10 Grammy Awards and three Latin Grammy Awards, and he and his band were inducted into the Rock and Roll Hall of Fame in 1998. Santana wore a throwback Cliff Branch jersey to earn his Celebrity Jersey Card. 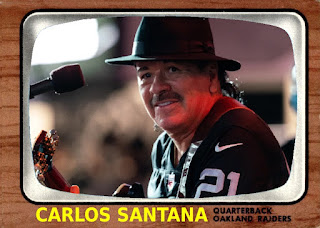 Neal Schon was born on Tinker Air Force Base in Oklahoma. The founder and lead guitarist of Journey, Schon is the sole original member to remain throughout the group's history. Prior to Journey, Schon was a member of Santana. In another coincidence, Schon also wore a Cliff Branch jersey to earn his Celebrity Jersey Card. 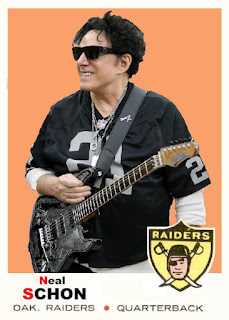