On the Beat With Emily Ramirez

Doing research prior to the interview, I knew how busy and talented Emily was, but I learned so much more talking to her. I learned her focus and determination started at an early age with her intent to be a ballerina, a goal she accomplished, spending a decade as a professional ballerina.

Eventually, Emily ventured into stand up comedy, sketch writing and more. She currently runs her own comedy business, with plans to open a comedy club in Park Forest.

It was through their individual comedy endeavors that Emily and Michele crossed paths. It was quite fortuitous, but somehow seemed inevitable.

Emily and Michele hit it off right away. They shared many of the same traits, but enough differences to make a winning combination. Michele got Emily on board with Divorce Diaries, which brings us pretty much up to date.

Emily discussed her career path, performing stand up versus writing for others, her personality traits, meeting Michele and more. Of course, she talked about her role in Divorce Diaries, too.

Early in the interview, Emily describes Michele's personality. Near the end of the interview, I mention how Emily's description of Michele sounded a lot like what I was learning about Emily.

Both women and so positive and full of real energy. Both make it clear Divorce Diaries is a positive, humorous look at things. Obviously, and rightly so, they are proud to be accomplishing this for women in comedy, but not at the expense of men or even other women. As Emily states, “There's room at the table for all.”

Divorce Diaries returns to the Chicago area on December 31, with a production at Westside Improv in Wheaton. What a great way to end the year and ring in 2023.

Prior to that though, Emily brings Improv NSFW to Forest Park on Tuesday, December 13. Being held at the Exit Strategy Brewing Company, this promises to be a great night of comedy. It is just a taste of what Emily plans to for the future in Forest Par

My exposure to the Divorce Diaries team had been such a blast of an experience. I've met great people, learned so much and have had many laughs along the way. I encourage all to check out Improv NSFW and Divorce Diaries. I want everyone to see the fun I'm having around these folks.

For more info on Emily, check BABSComedy.com. Check back here for my future coverage of Michele, Emily and the whole gang. 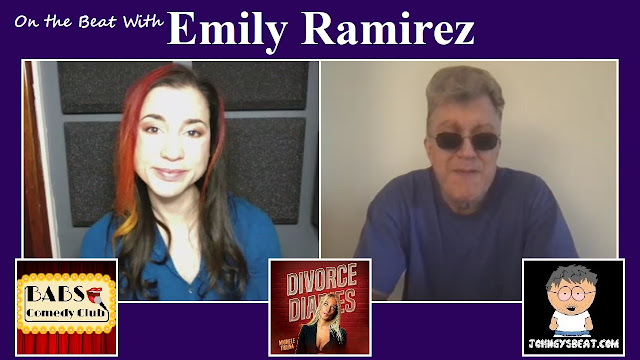