The Squared Circle Expo III is exactly four months away. Running April 7-8 in Indianapolis, IN, SCX promises to be even better then the debut and SCX II.
Last year, I was pleasantly surprised to see photographer Scott Romer. Although not announced, because he was a vendor guest, Romer has earned his place in wrestling history. Romer was selling When It Was: My Life on Both Sides of the Camera, his autobiography about his lengthy career photographing wrestling.
Romer has been ringside for legendary matches with Hall of Fame wrestlers. He has seen and documented huge moments in pro wrestling. His book is filled with interesting stories and awesome picture (of course).
For SCX III, the promoters already announced Kurt Angle, MJF, Jamie Hayter, Kevin Nash, Lisa Marie Varon, Rob Van Dam, Matt Cardona, Brian Myers, and Tatanka. They are just getting started though. I expect about 50 more wrestling stars added to that list. SCX really is the best wrestling convention of the year. With a wrestler lineup like that, vendors, panels and two nights of wrestling action, it is two days of the best wrestling-related fun.
Go to SquaredCircleX.com for more info on SCXIII. Also, check here for my recurring coverage and updates. 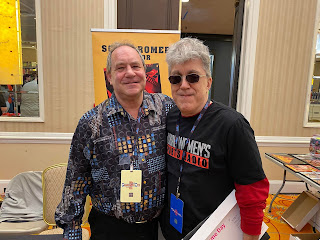