On the Beat With Mike Boryla

Mike Boryla was a star multi-sport athlete in high school and went on to a stellar career at quarterback for Stanford University. A first-team All-Pacific-8 selection in his senior year, Boryla was selected by the Cincinnati Bengals in the 1974 NFL Draft, but soon traded to the Philadelphia Eagles.

After his second season, Boryla was named to the 1976 NFL Pro Bowl. Boryla entered the game in the fourth quarter, threw two touchdown passes and led the NFC to a 23-20 comeback win.

After three seasons with the Eagles and two with the Tampa Bay Buccaneers, Boryla walked away from football and into a career as a lawyer. Although he left money on the table, he never looked back and has no regrets.

In the years since eaving football, Boryla has done a lot of writing. His first book was “Mark of the Beast.” He also wrote “The Disappearing Quarterback,” his one man play that he is turning into a book.

In our recent interview, Boryla discussed the origins of his writing career. Boryla talked about his faith guiding his life and an interesting person who inspired his decision, too.

The son of a former NBA player and coach, Boryla explained his father's effect on his life and decisions. He talked about getting to a peaceful place with his choices concerning his father.

Currently working on releasing “The Case of the Disappearing Quarterback” early next year, Boryla intends it to be unlike the average autobiography. Although he tells his life story, he promises the reader won't know what's coming next. He wants it to be a positive book and an educational one for younger readers, although from what I have seen and heard, I think people of all ages will learn lessons of life from it.

Through communication before and after the interview, I found Boryla to be a fascinating person. Seemingly on top of the world as a college star, high NFL draft pick and Pro Bowl QB, Boryla had a lot more on his mind and more important things to do and accomplish.

As the interview ended, Boryla promised to give an update interview after the release of “The Case of the Disappearing Quarterback.” I already have more questions to ask and I am certain I will add even more after reading his book.

I thank Boryla for his time and for fun football memories. I look forward to our next interview and encourage everyone to check back here for that. The interview is at On the Beat With Mike Boryla. 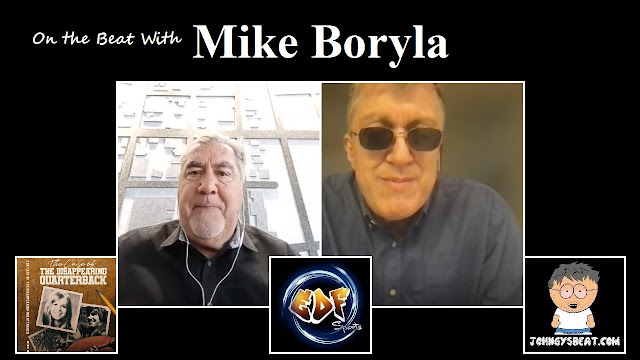