On the Beat With Peter Golenbock

Back in 1979, I saw “The Bronx Zoo” in the window of my local book store. It promised “An Astonishing Inside Story of the 1978 World Champion New York Yankees.” I had to buy the book.

In those days, I gleaned every bit of info I could get from baseball cards and magazines. “The Bronx Zoo” contained 256 pages about the best and most interesting team in baseball. More of a baseball fan than a pure Yankees fan, I still devoured that book multiple times.

“The Bronx Zoo” was the first such sports book I ever read. It would be followed by hundreds of others, many from Golenbock.

I started collecting Golenbock's older books, while awaiting his next book. Soon, my book shelf was filled with “Guidry,” “Number 1,” “Bats,” “Balls” and more from Golenbock. He became my go-to sports author and not just for baseball. “Thunder and Lightning: A No B.S. Hockey Memoir” is a fantastic book about NHL Hall of Famer Phil Esposito.

The great thing about Golenbock's books is they told the real stories. They weren't superficial cookie-cutter books about athletes. They revealed the true gritty stories, good and bad. The fact these books still hold up today is testament to how good they are.

Earlier this year, Golenbock released “Whispers of the Gods: Tales From Baseball's Golden Age, Told By the Men Who Played It.” Golenbock pulled tales from the hundreds of interviews he has done through the years. Among the players appearing in the book are Ted Williams, Roy Campanella, Jim Bouton, Roger Maris, Ron Santo and more than a dozen others.

Yesterday, I had the pleasure of interviewing Golenbock about his career and his latest book. Golenbock discussed starting his writing career (after realizing he would not be the next starting center fielder for his beloved Yankees), the internet's affect on books, writing about a subject he loves and his books, including “Whispers of the Gods,” of course. That interview is at On the Beat With Peter Golenbock.

After conducting hundreds of interviews for his dozens of books, Golenbock has countless hours of interesting baseball bits. In “Whispers of the Gods,” Golenbock shares interesting bits that did not appear in his other books.

I finished by asking Golenbock about his current and future projects. I was happy to hear there will be another “Whispers of the Gods” book. With all of his material, this could become a big series of books. Golenbock also talked about two other book projects, one of which is a serious nonsports book.

I really enjoyed this interview. Over his decades of writing, Golenbock has given me and thousands of other baseball fans so much information and entertainment. As I mentioned in the interview, I have never been a Yankees fan (at times even being a hater), but Golenbock's books are about baseball and that supersedes all team allegiances. 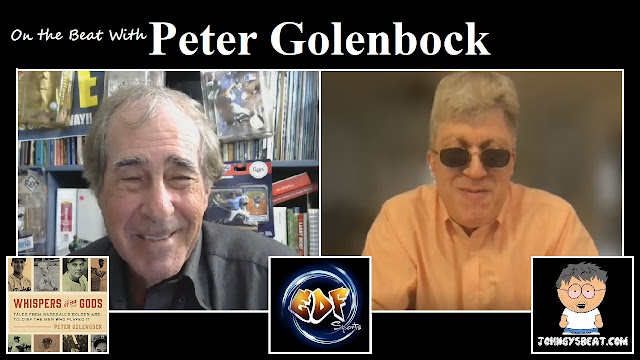