Cards That Never Were is a recurring series in which I create virtual trading cards for players missed in various sets. It is a concept I have borrowed from far too many to list, but I appreciate all of their efforts.

Tight end Greg Latta played college ball at Morgan State and was selected by the Baltimore Colts in the eighth round of the 1974 NFL Draft. He chose to play with the Florida Blazers of the World Football League instead. In a unique transaction, he was later traded to the Chicago Bears along with Blazers Head Coach Jack Pardee for two draft choices. He went on to play five seasons for the Bears. For his career, he played 20 games in the WFL, followed by 73 games (49 starts) for the Bears. He had 90 receptions for 1,081 yards and seven touchdowns. Unfortunately, Latta died in 1994 at the age of 42. 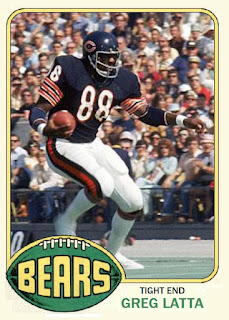