In my never-ending quest to meet every Score personality, I ventured a good several blocks from my home to the grand opening of an HH Gregg store to meet Brendan McCaffrey (aka Baldy McGrindy).  Where the Baldy moniker originated, I do not know.  I can guess that it started with Terry Boers, but doesn't everything start with Uncle Terry?
McCaffrey was out with the Score's promotions team.  I had flashbacks to my days of running such things while at Lerner Newspapers.  It's a losing proposition.
While there, I saw a kid spin the big wheel and land on the one sliver of the wheel with no prize.  The dejected (and confused) kid walked away.  McCaffrey gave him a sticker or something, but I felt bad for him and the kid.
Back in the day, my smallbrain GM made us have a similar wheel, with a similar no-prize slot on the wheel.  Making it worse was the fact that our "prizes" consisted of single wrapped pieces of hard candy, pens and free copies of our newspaper (not exactly items on any wish list).  Now imagine a family with three kids, where two of the kids win a "prize" and the third hits that unlucky slot.  I was supposed to be the jerk who gave "prizes" to just the two "winners".  Oh yeah, that went over well.
Anyway, kudos...of the day (borrowing an old Score bit) to McCaffrey for trying to make it up to the kid.  To the marketing whiz who put a non-winning slot on the wheel...you are a (insert the other end of that old Score bit here). 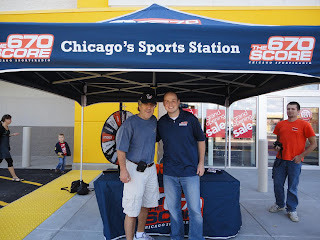