Occasionally, other people join Johngy's Beat to cover various events.  One such pinch-hitter is Jack Keenan who has supplied his photographic skills to the cause.
I always appreciate the extra helping hand, but I really love it when the person gets some extra benefit out of working with me.  Such was the case at the recent Hollywood Celebrities Show.
Jack got to meet and do a little promo work with Kristy McNichol.  In his youth, Jack had a bit of a crush on Kristy (who didn't though?).
I have had my fun meeting many of my favorites and it was cool to see Jack interacting with Kristy.  He described her as charming and she told me she found him delightful.  It could not have worked out any better. 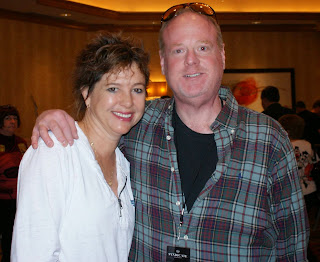 Kristy McNichol and Jack Keenan in Rosemont, IL-May 2015.
Posted by Johngy at 6:00 AM