Evan Chavez is a Dodgers fan who lives in New Mexico.  He also writes a fantastic blog about it, appropriately entitled New Mexico Fan.  Evan's unique perspective comes from living 800 miles from his favorite major league team and 10 miles from their AAA affiliate.
His geographical situation sets up an interesting angle for New Mexico Fan, but it is Evan's passion for baseball, his knowledge and his humor which make this a great blog.
I am not a Dodgers fan (no self-respecting Cubs fan would be), but I really enjoy Evan's site.  He has lots of great pictures (game shots and player appearances), stories and info.  Okay, to be honest, he has made me more of a Dodgers fan than I was before I found his site.
One of Evan's pictures is shown below.  Evan wrote about meeting Matt Moore here.  While you are checking out that story, roam around the rest of his site.  I am sure you will find it as entertaining as I do! 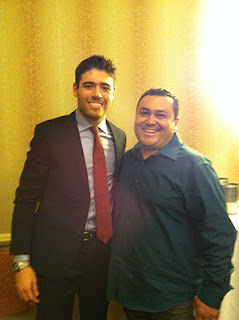 Matt Moore and Evan Chavez in Albuquerque, NM-January 2012.
Posted by Johngy at 5:55 AM