It is hard to believe that Mark Fidrych would have been 58 today.  Sadly, he died in April of 2009.
The Bird was unique.  He talked to the baseball.  He did his own groundskeeping of the mound.  He earned his nickname because he resembled Big Bird from Sesame Street.  He was such a refreshingly great story.
He went 19-9 in his rookie season, earning him the Rookie of the Year award.  He finished 2nd in the Cy Young voting and 11th for MVP.  Unfortunately, he would go 10-10 over the rest of his short career.
Arm problems plagued him and forced him to an early retirement.  Today, he probably would have lost a season or so to the injury.
I sent Fidrych a ball and he quickly returned it signed with the "ROY" inscription.  Fidrych was notoriously a great signer.  While others might have been bitter, Fidrych remained good-natured.  By all accounts, he was genuine and real and never changed.
Tragically, Fidrych died from suffocation resulting from a mishap while fixing his truck.  Fidrych had gone back to farm life, but did the occasional signing appearance.  Fidrych was one of a kind and his loss was felt by baseball fans everywhere. 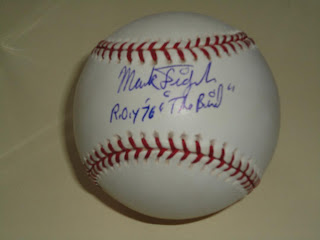 Mark "the Bird" Fidrych
Posted by Johngy at 5:55 AM