It has been a few months since we last "officially" heard from Cuzz Gekas.  I have often said we don't hear enough from Cuzz, but today is all his. 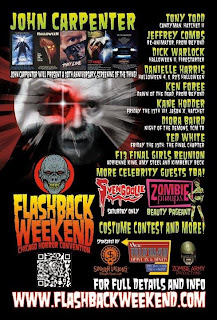 Hey everyone, Cuzz here and this "Cuzz Buzz" is all about my favorite local celebrity convention.
The 11th annual Flashback Weekend Chicago Horror Convention will be held August 10th through the 12th at the Crowne Plaza O’Hare Hotel in Rosemont, IL. Flashback Weekend is owned and operated by Mike and Mia Kerz of Niles, IL.  They also own and operate the Midway Drive-In and Diner in Dixon, IL.
I have been a regular attendee and it has consistently been one of the best horror conventions around. In addition to an always interesting lineup of celebrity guests, they also feature premier movie screenings, concerts, movie making workshops, celebrity Q & A's and horror show costume contests.  Everyone involved in Flashback Weekend does a great job in trying to make this a fantastic and fun-filled event.
This year should be another great show headlined by acclaimed director, John Carpenter (Halloween, The Thing) and actress Linda Blair of Exorcist fame.  Chicago's own Svengoolie will be there, too.  Oh yeah, Johngy and I will also be in attendance this year.
Johngy loves this event, too.  Over the years, he has met several of his favorites, like Roddy Piper, P.J. Soles and Kelli Maroney.  In fact, last year, Johngy Interviewed Kelli (one of the highlights of his year...maybe life).  I know he has a few interviews lined up for this year and those will appear here shortly after Flashback Weekend.
Check out FlashbackWeekend.com and the Flashback Weekend Facebook page for all of the details and updates.  Don't miss this one! 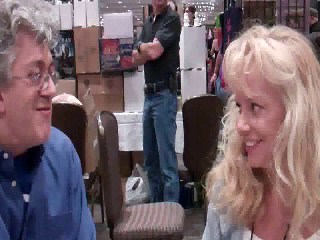 Johngy interviewing Kelli Maroney at Flashback Weekend in Rosemont, IL-August 2011.
Posted by Johngy at 5:55 AM