Hanging With Booker T at Wizard World (Can You Dig That?)

Booker T has held too many wrestling titles for me to count.  With his brother as the tag team Harlem Heat or on his own, the man was a main event player for years.
He recently published his autobiography, Booker T: From Prison to Promise: Life Before the Squared Circle and was promoting it at Wizard World.  From the looks of the long line to meet him, Booker T isone of the most popular wrestlers.
Matt and I got our chance to strike the Booker T "five time" pose with this future Hall of Famer.  Despite the long line, Booker did his best to make a real connection with each fan.  Considering this type of time constraint, Booker T did a great job.
It seems to be a bit of a secret that Wizard World is a great place to meet wrestlers.  Each year, several well-known wrestlers have booths at the con.  There usually aren't huge lines (except for the mega-stars like John Cena and CM Punk) and the prices are reasonable.  I have added many wrestlers to my collection over the years at Wizard World. 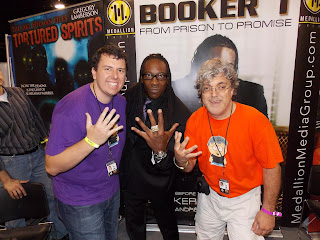 Matt Parker, Booker T and me at Wizard World in Rosemont, IL-August 2012.
Posted by Johngy at 5:55 AM