Matt Parker and I spent last Thursday through Sunday as official vloggers at Wizard World.  It was an incredible opportunity and a unique experience.
Our duties included getting as many interviews or video bits as possible.  Everyone and everything was fair game.  All told, we got about 60 video bits over the course of the convention.
Wizard World is one of the largest pop culture conventions.  It is held in several cities, but Chicago is one of their biggest events.  They have all sorts of celebrities, as well as artists, writers and illustrators.  They also have hundreds of vendors.
The video below shows the madness as the convention officially opened.  For those concerned about his well being, Matt was not injured in the filming of this segment.
I would like to thank everyone who voted for me in the vlogger contest.  I would also like to thank Jerry Milani, Director of PR.  Although he was insanely busy, Milani still took time to help me in landing a few key interviews.
As I stated above, this convention is held in many cities, the next being Columbus, OH, on September 28-30.  I strongly encourage everyone to attend a Wizard World convention if you have the chance.
As for me, I am still riding high.  Doing my small part to bring you coverage on the event was a lot of fun.  Working as a team with my nephew Matt was an experience I will always treasure.
The interviews and pictures we got will be appearing here over the next few weeks.  I hope you enjoy our work as much as we enjoyed doing it. 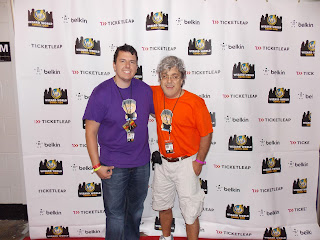 Matt Parker and me at Wizard World in Rosemont, IL-August 2012.
Posted by Johngy at 5:55 AM

Glad it was a success! Sounds like a lot fun along with a lot of work!