This is a regular feature which attempts to combine my lifelong passion for sports cards with my interest in celebrities.  As baseball season winds down and football season starts, I am combining the two with today's edition of Celebrity Jersey Cards.

Tim Lincecum is a native of the Seattle area.  This would explain his allegiance to the Seahawks.  At 5'11" and 175 pounds, he would be too small to be anything but a punter or maybe a kick returner (if he has the speed).  You do have to like his enthusiasm.  It's not often seen on sports cards, but that is another reason why Celebrity Jersey Cards rule! 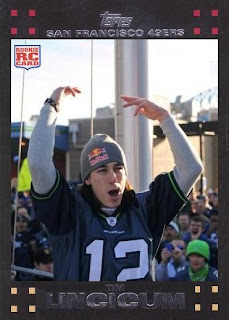 Paul Moyer spent seven seasons as a defensive back for the Seahawks and had one football card from a major company.  Jamie Moyer (no relation) spent eleven seasons in Seattle, going 145-87.  It was where Moyer developed into a solid pitcher.  Moyer has shown a lot of heart during his career.  He has stated that he would like to pitch into his 50's, but it looks like his baseball career might be over.  As another option, perhaps he could make the Seahawks as a kicker. 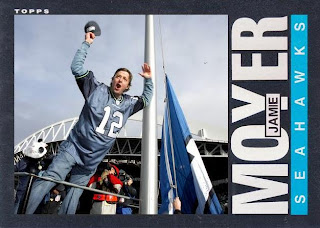