I always get a kick out of celebrities wanting pictures with other celebrities at conventions.  Of course, I also get a kick when one of the celebrities is a friend.  Such was the case when Sarah French met Tyler Mane at Flashback Weekend, a great yearly  convention in the Chicago area.
I actually saw Sarah at Wizard World, where her and Joe Knetter were checking out stuff and meeting other celebrities.  Later, they made their way to Flashback Weekend.
I have written many times that I absolutely love Sarah (yes, and Joe, too).  They are two of my very favorites and definitely two of the coolest, nicest celebrities I have met.
Sarah took pictures with several celebrities, but I chose the one with Tyler Mane (actor and former wrestler).  We had interviewed Tyler at some point during the Wizard World convention.  Wow...all of the worlds are colliding here.
At this point, I must also add that Tyler (and Renae Geerlings) were also very nice when we interviewed them.  They graciously gave us several minutes of their time.
In any case, I am always interested to see which celebrity another celebrity grabbed for a photo.  Of course, it is hard to predict which celeb wanted the photo with the other or if it was mutual.
If all of that is confusing, don't worry.  Just look at the lovely Sarah and it will all be better.
As for me, I am hoping to see Sarah (and Joe, too) again sometime this year.  I don't think they will get as big of a thrill from posing with me, but I am sure they will be good sports.  They always are! 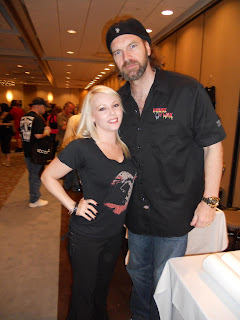 Sarah French and Tyler Mane in Rosemont, IL-August 2012.
Posted by Johngy at 6:00 AM