The 1975 Topps baseball card set was the first set I ever collected to completion.  For this reason and many others, I will always have a special place in my heart for this set.  Still, I think Topps had some omissions (some glaring, some just in my warped mind).  In either case, I am setting out to slowly fill in those gaps.
The 1974 St. Louis Cardinals used four catchers and found it fitting to make cards for two of them.  One of my all-time favorites Ted Simmons was their regular catcher, starting 139 games (plus an additional 11 at 1st base).  Simba should be in the Baseball Hall of Fame, but that is another issue.  Tim McCarver started 16, with an additional 4 at 1st base.
Marc Hill started 6 games in 19784, after starting one in 1973.  Hill went on to have a lengthy career, including holding the White Sox single season record with Carlton Fisk for most home runs by a catching duo (but that, too, is another issue).  If not for consecutive 100+ start seasons in 1977-1978, Hill would be a lock for the Backup Catcher Hall of Fame.
Hill actually appears on a 1975 Topps card, as part of a "1975 Rookie Catchers-Outfielders" card.  Unfortunately for Hill, he shares that card with HOFer Gary Carter (among others).  That makes it harder and more expensive for Hill to get his own card.  Topps did a decent job of airbrushing him into a Giants uniform after the October trade.  In summary, the card I created might not be necessary, but I like seeing players shown with every team during their career.
The fourth catcher for the 1975 Cards was Dick Billings.  You might recall that Billings had a Washington-Texas connection to Rick Stelmaszek, another old favorite.  Billings appeared at catcher in one game in 1974 and also batted in one game in 1975.
Was that one game deserving of a card in the 1975 set?  Well, he is a catcher and he was never pictured with the Cardinals otherwise.  Therefore, I deem him 1975 card worthy.
I am guessing that these pictures were taken in September of 1975 at Wrigley Field.  Ironically, Stelmaszek would have been with the Cubs at this time. 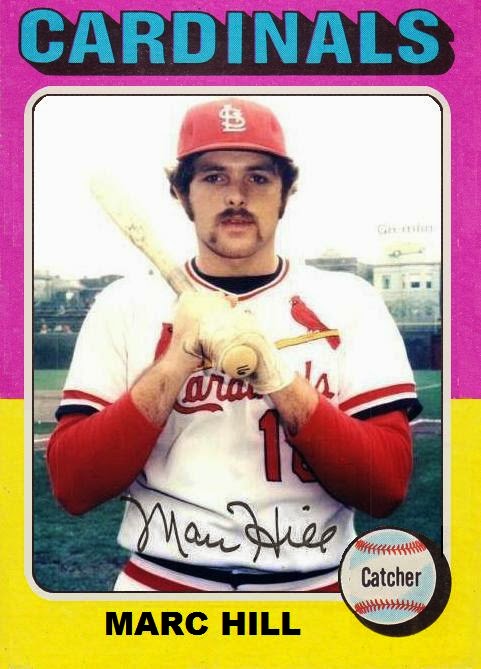 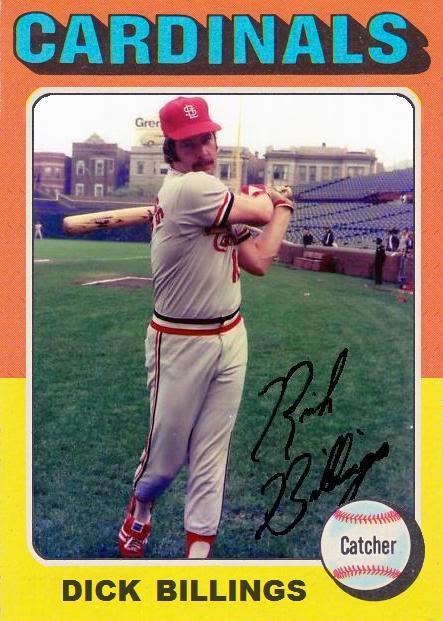 Like the '75 cards. Topps has a ton of cards that should've made it into sets that never did. They could easily turn Archives into a 'Cards that never were' set and be set for years. I do more '90's and upward customs and am trying to give a '92 Topps card for every player and coach who appeared in 1991. I did a coach card of Hill if you ever get time to check it out. Great work on your customs. I look forward to seeing more.

Could I get Richard Billings card? He’s my uncle many thanks
Barbara Hogan
Hogan26@ Comcast.net