The Chicago Bears are reeling at 3-6.  The Minnesota Vikings are one step better at 4-5.  They face off today, in what could determine last place in the NFC North.
The season is dismal.  The team is underachieving.  We all need something to give us hope.  We need something to cheer up the mood.  We need some bliss in our lives.
Did someone say we need some Bliss?
It's always a good time to feature the Chicago Bliss.  They are the reigning LFL champs (having won the title in 2013 and 2014).  They are a class organization off the field and a tough, exciting, awesome team on the field.
Nobody epitomizes all of that better than Dominique "DC" Collins.  I love DC.  She was the first Bliss player I interviewed at a game and I have interviewed her many times since.  She is a consummate pro.
DC is versatile on offense, rushing or receiving.  She can block, too!  On defense, she is tenacious.  In short, she is a joy to watch.
While the Bears are muddling through today's game (win or lose), I will be recalling the many great moments of the Bliss season.  DC will surely pop up in a lot of those highlights.
Thank you to DC for being such a pro.  Thanks for always being great to us on Johngy's Beat.  Thanks for giving us great memories (especially during this forgetful Bears season). 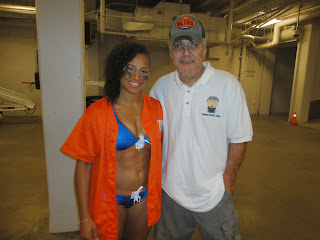 Dominique Collins and me in Milwaukee, WI-August 2014.
Posted by Johngy at 6:00 AM