Gabe Baron is a big fan of Paul Williams.  The co-owner of Resistance Pro and I share an affinity for 70's tv and some other obscure stuff.  I happen to share his interest in Williams, too.
I admit that I first became aware of Williams from seeing him on tv's The Odd Couple, but his career goes well beyond a role on episodic television.  Williams is a singer, song-writer, actor and more.  He is a true legend.
Gabe met Williams in 2012 and it was a great moment for him.  I am borrowing from his Facebook post of September 19, because he expressed it far more eloquently than I could for him.

It's Paul Williams birthday, so I'm reposting this photo of us taken back in July 2012. This was the second happiest day of my life (Amelie's birth is still #1) and I feel honored and blessed to have met someone who has had such a huge influence on me - ever since I was 2 years old and heard "Rainbow Connection".
Paul's genuine goodwill and inspiring words/deeds make me want to be a better person. I will forever be in debt as both a fan and a human being. Being grateful of what we have in the present and having trust in the future is his mantra - I try to keep that in mind whenever I'm discouraged and it helps more than you can imagine.

That is the very essence of Friendly Encounters and JohngysBeat.com.  Williams has had a profound impact on Gabe.  It might seem like an unlikely combo, but that is the beauty of it.  Who knows what exactly makes the certain connections we have with others, including celebrities?
I find Gabe's post so intriguing.  In the rough world of pro wrestling, Gabe didn't hesitate to expose his feelings towards Williams.  Actually Gabe is usually quite expressive on FB.  I applaud him for that.  You would probably have guessed over a hundred musicians before you came to Williams as Gabe's choice.  I would have and I am a fan of Williams.
I am sure Gabe is trying to get Williams to appear at an RPro show.  If so, I would probably have to fight him off for the interview.  On second thought, I'd love to see Gabe do the interview.  Such passion should not be denied. 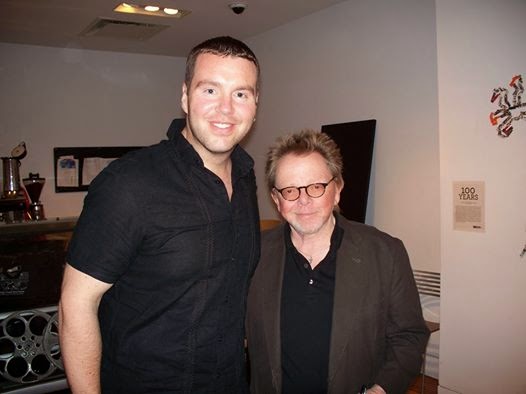 Gabe Baron and Paul Williams in Illinois-July 2012.
Posted by Johngy at 6:00 AM