I met Mike Caputo several years ago at POWW.  His "lost soul" gimmick was interesting and definitely a fan favorite.  He has been a mainstay at POWW ever since.  Whether as good or bad guy, the fans love watching him perform.  Aside from being an entertaining in-ring performer, Mike is a good guy.
Mike is also a big fan of the Blackhawks.  Last year, he met Andrew Shaw shortly after he was traded from the team.  Mike described him as a "cool dude," adding that he will miss him.  He is not alone in missing Shaw, a very popular player.
Fortunately for wrestling fans, Mike is still performing in the Chicago area.  Get out to a POWW show and watch this man perform his craft.  Head to POWWEntertainment.com for more info, including their event schedule. 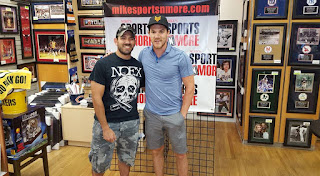 Mike Caputo and Andrew Shaw in Downers Grove-IL-July 2016.
Posted by Johngy at 6:00 AM