Another year is almost done and Josh Watko of JWsWrestlingMemorabliia has just announced his 2016 Joshie award winners.  Unfortunately, once again, I did not win a Joshie.  Technically, I am not even sure I would qualify for a Joshie, but it still remains my goal.
Josh is a celebrity fan, with a major focus on wrestling.  His site is full of great wrestling stories, pictures, reviews and more.  It's very well done and I am not just saying that to enhance my chances for a Joshie in 2017 (lthouh if that works, so be it).
Anyway, as you can see below, Josh meets more than just wrestlers.  He met former teen idol Tifffany a couple years back.  Does that mean that is a picture of two former teen idols?
Doesn't Tiffany still look great?  More importantly, she sings even better.  Yes, I admit, I am a fan of hers.
Of course, I am also a fan of Josh's.  Some day, maybe Johngy will win a Joshie.  I'm hoping to even meet Josh someday. 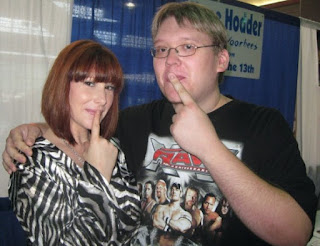