This is a regular series where I create virtual trading cards for jersey-clad celebrities.

The billionaire owner of the Dallas Maveracks and costar of tv's Shark Tank, Mark Cuban is a native of Pittsburgh, PA.  He is very visible at Mavericks games, which is where e earned his Celebrity Jersey Card.  I am guessing the #42 is for longtime Mavericks star Jerry Stackhouse. 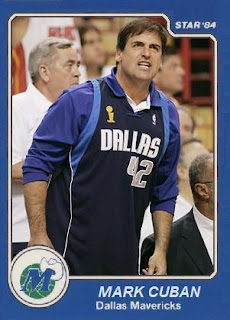 Michael Bloomberg was born in Boston, MA, but eventually became the 108th Mayor of New York City.  I believe this is the first appearance of a cigar on a Celebrity Jersey Card.  I am guessing his #1 is for personal reasons, as opposed to an actual player, since nobody really stood out as a #1 with the Knicks.  I give him extra points for bringing back great memories from the first year of basketball cards I collected.