Today I am featuring two characters from wrestling.  One is a fan, while the other is a wrestler, but stand out in the crowd.
Eric Joseph Larkin is a big supporter of independent wrestling and the wrestlers themselves.  He can often be seen in several different shirts during the course o the night, depending on which wrestler is in the ring.  Some day, I have to ask him how he decides which shirt to wear if two of his favorites square off.
Pictured with Larkin is the lovely Leva Bates.  Leva is called "Blue Pants," and she is nown for her cosplaying.  She will often wrestle in various costumes mimicking her favorite characters.
These two came together at a Resistance Pro event.  Actually, I believe I took this photo.  Appropriately, Leva chided Larkin for wearing a Crazy Mary Dobson shirt.  I don't think she knew that he is known for wearing so many shirts though.  I do think he might have bought one of her shirts after that, too. 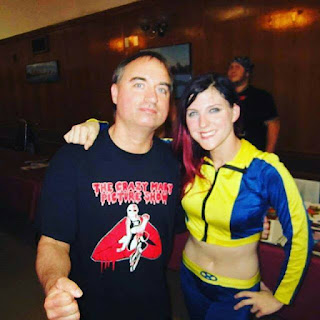 Eric Joseph Larkin and Leva Blue Pants in Summit, IL-June 2015.
Posted by Johngy at 6:00 AM