When we last featured John Crowther, he was with with Nicolai Volkoff.  John was promoting Nicolai Volkoff: The Comic Series.  John was kind enough to give us a little scoop on his next project, too.  That project would feature the Killer Bees (Jumpin' Jim Brunzell and B Brian Blair).  The Killer Bees project is now officially on Kickstarter at Killer Bees: Issue 1.
The Killer Bees: Issue 1 is the biography of The Killer Bees in comic book form, based on interviews with Blair and Brunzell.  Highly successful and extremely popular, The Killer Bees were among the top tag teams from the mid-1980's through the mid-1990's.  They remain popular to this day.
The Killer Bees: Issue 1 promises the same kind of in-depth and behind-the-scenes stories that were featured in the Nicolai Volkoff comic.  There will be stories about the AWA, WWF, UWF and more.  All of this will be accompanied by awesome artistry.
The Killer Bees: Issue 1 is your chance to relive some of the greatest moments in wrestling or to learn more about those times.  It is a championship combination of wrestling history in comic book form.  I love the concept and I look forward to more from John.
Once again, on the Kickstarter page for The Killer Bees, there are several levels of pledges, each coming with a set of rewards.  This is a chance to get a cool comic and to get some other fun stuff, like Killer Bees decals, autographs, trading cards, other similar comic releases and more.  The Kickstarter campaign ends on July 11.
I appreciate John sharing his comics and campaigns here.  They are great quality and I am sure wrestling fans or even plain comic fans will love these comics. 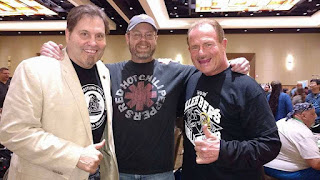 Brian Blair, John Crowther and Jim Brunzell in Orlando, FL-April 2017.
Posted by Johngy at 6:00 AM