Celebrity Jersey Cards is a weekly series in which I create virtual trading cards for jersey-clad celebrities.  Today, we continue working our way alphabetically through Major League Baseball.

Although he was born in San Diego, CA, actor Ted Danson will forever be linked with the Boston Red Sox, because of his popular role as Sam Malone on tv's Cheers.  Danson gets extra points for wearing a full uniform, including a jacket, on his Celebrity Jersey Card.  He gets more points for being in the dugout and for the background appearance of former co-star Rhea Perlman.  Most trivia buffs know that the picture of "Sam Malone" behind the bar at Cheers was of former pitcher Jim Lonborg. 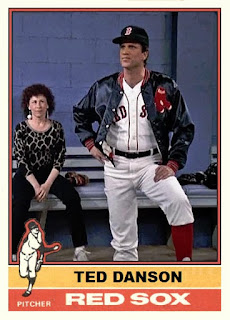 Actor Raul Julia was born in Puerto Rico.  His many roles include a stint on Sesame Street, as well as appearances in two film adaptations of The Addams Family.  It was his role in Trading Hearts that landed him on a Celebrity Jersey Card. 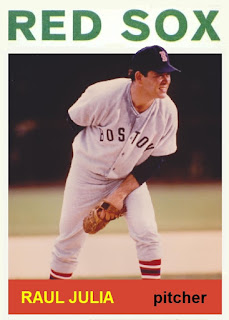