When I last reported on the Squared Circle Expo 2020, I shared the news that it had been rescheduled for August 21-22.
The SCE organizers recently announced that all previously purchased tickets have been transferred to the new dates, unless otherwise requested. Also, all reservations made through SCE and the Wyndham Indianapolis West have been transferred. Anything secured through third party sources would need to be transferred through those places.
The SCE organizers also announced a new guest. Dustin Runnels has been added to the wrestling guest lineup.
Debuting in 1988, Runnels has gone on to have a legendary and underrated career. He has won 23 titles between the WWE and TNA. He also has the second most Royal Ru8mble appearances with 13. Runnels has continued to evolve his character or create new ones as his career progressed.
Originally “The Natural,” Runnels followed in the footsteps of his Hall of Fame father Dusty Rhodes. When he started his second stint in the WWE in 1995, he debuted Goldust, one of the most unique and controversial characters ever in wrestling. Since then, Runnels has continued making Goldust interesting by keeping the character fresh. Currently, Runnels is wrestling for All Elite Wrestling.
I have met Runnels many times. He is always great. The last time I met Runnels, I had the pleasure of talking to him for several minutes about his career. Of course, the conversation turned to his epic match with brother Cody in AEW. I totally felt his pride in the match. It was palpable. He even thanked me for my appreciation for the match.
I also mentioned other fun moments from his career, like his infamous match with Rowdy Roddy Piper. Runnels has a deep appreciation for his fans and our memories of him.
I am really looking forward to seeing Runnels again. People ask why fans want to meet wrestlers so many times. At least with Runnels, the answer is simple. Much like his characters, each encounter is enjoyable and unique.
The organizers of the SCE have been busier than usual because of the rescheduling caused by the pandemic. They have been frantically securing old wrestling guests as well as new ones. They have transferred tickets and reservations. They have also kept fans updated along the way and we all appreciate that. Especially during this time of great confusion,l it is great to have answers on this big event and to be able to look forward to it!
The Squared Circle Expo 2020 is now four months away. I will continue to provide updates and coverage all through the event.
Check SquaredCircleX.com for all of the info on this great event. Also follow Squared Circle Expo on Facebook for more frequent updates. 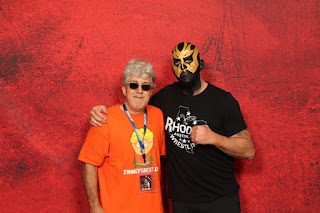 Dustin Runnels and me in Indianapolis, IN-July 2019.
Posted by Johngy at 6:00 AM