The main theme throughout all the sessions was the seemingly new level of competition in the WNBA. With several free agents changing teams, a few significant trades and a new class of draftees, more teams than ever are poised to make a run at the WNBA title.

Coach Laimbeer mentioned he felt at least six teams were true title contenders. (I presume it would be six among Seattle, Las Vegas, Chicago, Connecticut, Los Angeles, Minnesota and Phoenix.) He continued the league has ebbs and flows. It's the nature of the league and the nature of sports.

The players agreed with Laimbeer that there is a high level of competition, but it really is just business as usual. They can only do their best with the schedule as is. Everything else will take care of itself.

I asked Wilson about her statue, which was erected earlier this year at South Carolina, where she starred on the courts. Wilson discussed the significance to her personally, as well as to women and women athletes. It's something that gives her great pride, but she is humble when discussing it, stating she isn't the first nor will she be the last woman to get a statue, but it still means alot.

Cambage and Plum talked about returning to the team. Plum suffered an injured Achilles tendon and missed the 2020 season.  Cambage sat out the 2020 season due to health concerns. Both players are excited to return and are in playing shape already.

An added highlight for me was Cambage's interactions with Las Vegas Director of Media Relations John "Giggy" Maxwell as they tried adjusting the backdrop and the lighting. Cambage also had fun interactions with the press about her musical choices. Aside from being a star on the court, she is a very popular disc jockey and certainly knows her music.

The athletes also rated the Las Vegas black jerseys as their favorites among the new jerseys. They liked the better fit and styles. They also stated their opinions tend to change as they change uniforms, but overall black takes a slight advantage.

. Also check WNBA.com for more info on the league and the Aces. Look for my recurring coverage here, Patch.com, GlobalTravelerUSA.com and GlobalWomensSportRadio.com. 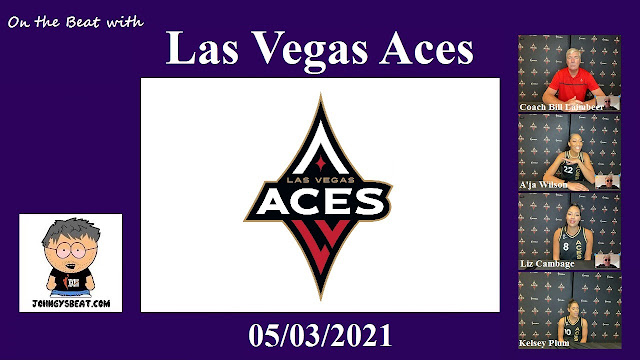