The New York Liberty held a post-practice media session featuring Sabrina Ionescu and Janelle Bailey. Practice ran a little long and the players were a bit pressed for time, but there was still some interesting subjects discussed.

Second year guard Ionescu started by talking about the importance of family. Her family is a great source of support and she relies on them and appreciates them greatly. She then went on to talk about her mindset through and after the injury. Unplanned and unwanted time away from the court gave her a renewed and greater appreciation for all she has and where she is. She also talked about the difference in camp this year versus camp in the Bubble last year.

Ionescu is coming back from an ankle injury suffered in the third game last season. The injury took her out of the entire season.

As the NCAA all-time leader in career triple-doubles, the Pac-12 Conference all-time leader in assists, and the only NCAA Division I basketball player to record 2,000 points, 1,000 assists, and 1,000 rebounds in a career, Ionescu had built quite a legacy at Oregon. Her play led the Liberty to select her with the first overall pick in the 2020 WNBA Draft. Big things were expect, but the injury derailed those plans. Heading into this season, Ionescu says she is fully recovered and ready to producing for the Liberty.

Rookie center Janelle Bailey went undrafted after a stellar career at North Carolina. Bailey was the 5th player in school history to total 1,700 career points and 1,000 rebounds. She also was among the 10 semifinalists for the Lisa Leslie Award as the nation’s top center each of her final 3 seasons. Although she surprisingly was not drafted, she quickly signed with the Liberty.

Born in Brooklyn, Bailey expressed her happiness with joining her native town team. She also noted despite being raised in North Carolina, she has a special place and many family and friends in the New York area. Bailey talked about the experience going from undrafted to signing with the team. She also talked about her biggest challenges and adjustments she'll need to make in camp to make the team.

May is Mental Health Awareness Month, a fact not lost on Bailey. She talked about the importance of mental health awareness for her and her team, what all are doing to promote awareness and what everyone else, especially those affected, should do. It is just one more important cause the WNBA is addressing.

The Liberty opens the 2021 WNBA season against the Indiana Fever at the Barclays Center. The team finished a woeful 2-20 last season, good for last place overall. I am not going on a limb in saying they will be vastly improved this season.

The interview session can be found at On the Beat With the New York Liberty 05/01/2021. Also, check WNBA.com for info on the Liberty and the league. Check here, GlobalTravelerUSA.com, Patch.com and GlobalWomensSportsRadio.com for my recurring coverage. 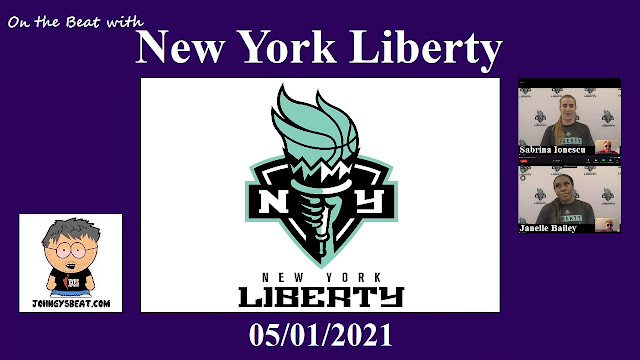